Monitoring
One of my tentative projects at the new build is to extend some of the monitoring and RL integration aspects. For a good while, I had a basic visitor log and activity log at the old SkyLounge build. Every evening, I'd get an email summary of every visitor and his interactions with the various elements of the build. Or, more often, an email telling me that nothing happened for yet another day. Just for the heck of it, I've continued this monitoring in SkyPod 4 (not that I expect many/any visitors).

Eventually, I started filtering out my own actions and mirroring these notices to a Twitter feed, using TwitterMail. Now, every time a visitor arrives, interacts with a scripted object, changes the holodeck program, watches the fireworks (or turns them on manually), takes an elevator, changes the radio station, or anything else I can think of, a message is sent to the public Twitter feed. This feed is, in turn, relayed to an object at SkyPod 4 via SL's built-in web-on-a-prim.

More recently, I've started monitoring that feed using If This, Then That (IFTTT), with an eye toward adding more channels for integration elsewhere. At present, I'm monitoring for a #VisitorCount hash tag, and pinging my phone via Pushover when a new (non-me) visitor arrives. We'll see how long that lasts. SL is an international community, and I'm not so interested in my visitors that I'm willing to be woken up at 4am local time to hear about them.

In any case, if you can think of any nifty SL-to-RL interactions that'd be worth playing with, please drop me a comment below.
Posted by Moriash Moreau at 1:54 PM - 0 comments 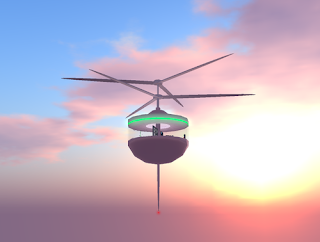 After sitting on a 560 m^2 parcel with nothing but a tree and a couple of shrubs on it for the last year or so, I decided to throw up a simple sky-house for myself. What you see above is SkyPod 4. It's the architectural offspring of Mo-Tech Tower/SkyLounge, SkyPod 1 and SkyPod 3. (SkyPod 2 was a floating, max-shiny bubble of mercury with a basic old-school camera observation system. I think I mentioned it exactly once.) It incorporates the previous SkyPod clean blank-prim-with-shiny design scheme, with a scrolling color band and a couple of glow and particle accents, just to keep it from looking unfinished.  Nothing terribly cutting edge, but I'm pleased with how it turned out. 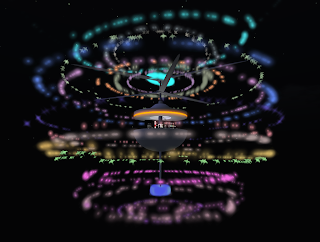 This incarnation of the SkyPod series incorporates many features from the previous builds. This picture shows the next generation of the fireworks system from the SkyLounge. They activate every day at dusk (give it a moment to start; they're on a sensor- no sense in adding lag if nobody is around), with a user override for daytime visitors.  It's still just random particle wanking, but pretty nonetheless, if I do say so myself.

The Pod is supported from two counter-rotating props, taking advantage of the relatively-recent addition of megaprims to the current viewers to make plausibly large blades. Yes, I asked my neighbors. They're okay with the props spinning across property lines here, as long as I don't chop up their builds in the process. Silky and Will are cool like that.

Inside, I've kept the usual floating furniture and basic black-on-grey color scheme.  Currently, it's something of a monument to myself, with samples of photography, some my previous SL projects, and the obligatory Mo-Tech Industries freebie dispenser. I even had sufficient ego to add informational "?" buttons here and there, describing various bits and pieces.  Hopefully, I'll replace my prim laurel-resting with new projects before too long.

Building this now, after a year or more of absence, showed me just how far SL has progressed.  When I went inactive, building at 4 kilometers was still a pain in the rump. Not too long before I dropped out, they got rid of the 768 meter build limit, and the 2,000 meter sim-reset permanence limit that meant rezzing and maintaining everything by custom script.  But there was still the matter of the flight cap (~80m to ~100m), and the associated need for flight assists and teleporters to reach those heights, restricting the airspace to a certain minimum builder tech savvy level, and assuring that builds near the absolute 4,096m build cap were rare, private and relatively clear of sky trash.

Sadly, that's no longer the case.  If you visit, you'll notice that it's resting at around 2,500m above ground.  This was because of the overwhelming number of skyboxes and house-on-a-green-prim builds at just about every altitude, and especially at the four kilometer barrier.  (There's also some changes to the behavior at 4,096m with regard to flight and scripted attachments, but that's a matter for future investigation.)  As I discovered by accident, the flight limit has been removed (a decision I fully endorse), and evidently long-distance teleporters have become sufficiently mainstream (as opposed to merely common, but technically daunting) for ordinary use

That's kind of a shame, on a personal level, but removal of arbitrary limits and lowering of technical barriers are (arguably) good for SL overall. As it stands, after spending half an hour flying up and down, I had to settle for turning down my draw distance a bit (no real hardship, given my ancient PC's abilities) and pick the least crowded option. Not a terrible loss, I suppose.

So, there it is. SkyPod 4 is up and running.  Feel free to drop by, if you're bored and/or interested in seeing tiny lo-fi builds on entry-level sized public sim parcels. (Why?!) Map link is up there on the right.
Posted by Moriash Moreau at 10:49 AM - 0 comments 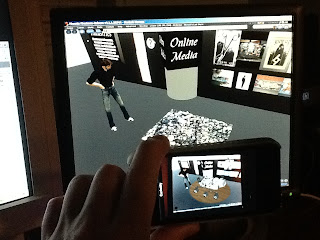 Me and my avatar, looking at the Curiosity rover using JPL's Spacecraft 3D iPhone app, photographed via iPad. That blotchy rectangle in the middle is the AR target, a sample of Martian soil. So basically an augmented reality application enhancing a virtual world by showing a 3D model of a real space exploration vehicle, documented by a digital camera.

Plywood Archive and Commentary
Just a quick note: Plywood is now archived at my DeviantART page.  Also included is comic-by-comic commentary about making the comic and about ancient SL history, by myself and by co-creator Monica Young.  Might be worth a read!
Posted by Moriash Moreau at 9:41 PM - 0 comments

Plywood Shutting Down
I'm sure nobody is reading this anymore but I thought I'd mention it, just in case. The Plywood Webcomic page is shutting down at the end of the month. Read it while you can.

I've also hacked down what was up until recently the Tallest Eyesore in Second Life. That's right, Mo-Tech Tower - all four kilometers of it - is no more. My apologies to the half dozen squatters who logged in only to find themselves hanging unsupported a couple miles off the ground. Happy landings.

And, well, that's about it.

For those of you still making a go of it, enjoy your Second Life. Edit: As Octobriana (Oz) points out, Plywood is still available, substantially intact, at the Internet Archive (the Wayback Machine).
Posted by Moriash Moreau at 9:48 AM - 4 comments